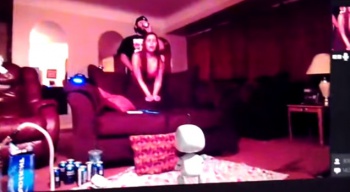 The PlayStation 4’s on-camera streaming feature is being used for something a little more daring than what Sony intended, with The Playroom’s robots not having a choice but to watch.

For those with a PlayStation 4 camera, The Playroom lets people record themselves playing games and then broadcast it on the internet, with little robots accompanying the streamer for company. While Sony might have created the PS4’s The Playroom to be used for gaming, some (well, a lot) of people are using it for very, very different purposes. Namely, to record themselves having sex live and then sharing their sessions online. It’s gotten to the point that going to The Playroom sub-Reddit (warning: very NSFW — even the banner image is NSFW, along with the other content) will link you to a host of lewd The Playroom images. Just imagine what the little robots are feeling while they’re exposed to people doing the nasty live.

Last year, Twitch acted on non-gaming shows on the channel, and later pulled all The Playroom listings from Twitch. It seems, PS4 users that have a little too much time on their hands found a new avenue to exhibit their “work.”

Arguably, putting a camera and an audience to people might mean that live sex shows are inevitability, but at this day and age, what’s the point? Just by using your browser or going to Google alone, people can be exposed to as much nakedness, and porn as they want. Then again, with the “shows” gaining traction, that might be the answer why some people do it. I do feel bad for Sony, though, and I can see them acting swiftly to take action against offenders. Let’s hope they don’t outright discontinue The Playroom itself for the sake of those using it legitimately.