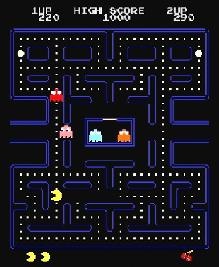 Google’s Android mobile operating system and its Android Marketplace, meant to sell phone applications similar to Apple’s iTunes Store for the iPhone, debuted in late October to an unknown audience of T-Mobile users who bought the first phone running the Android platform.

After the first four days, 167 programs were made available on the marketplace, with 73 to 81 percent of total downloads coming from 41 percent of applications.

Matching the popularity of games on the iPhone is Pac-Man, the most downloaded Android program. Namco’s port of the historic game has sold somewhere between 50,000 and 250,000 copies with an average reviewer rating of four out of five.

The numbers pale in comparison to Apple, which distributed 100 million downloads in the first sixty days. Considering the lack of Apple-level hype for the Android phones, finding games that still reach 250,000 individuals within a small audience reinforces the popularity of phone gaming.