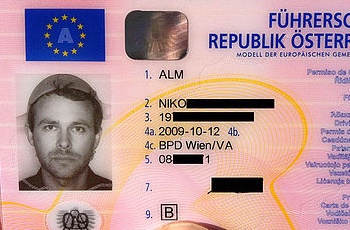 An Austrian follower of the Church of the Flying Spaghetti Monster has won the right to wear a pasta strainer on his head as “religious headgear” in his official driver’s license photo.

The Church of the Flying Spaghetti Monster – or “Pastafarianism,” as it’s also known – first came into being in 2005 as a parody protest of the Kansas State Board of Education’s decision to begin teaching intelligent design in public schools as an alternative to evolution. The faux-religion quickly, and entirely unsurprisingly, became a sensation on the internet, with thousands of “followers” touched by the noodly appendage of its deity, the Flying Spaghetti Monster.

One particularly devoted adherent is Niko Alm of Austria, who, after a three-year effort that included a government-mandated psychological examination to determine if he was mentally fit to drive in the first place, has won the right to wear a pasta strainer on his head in his official driver’s license photo. He applied to wear the gear after the Austrian government began allowing “confessional headgear” to be worn in official photographs.

Alm, who admits to actually being an atheist, said that with this battle won, his next step is to apply to the authorities to have Pastafarianism recognized as an official religion.

Analysts: Sony Made Money on Welcome Back Program