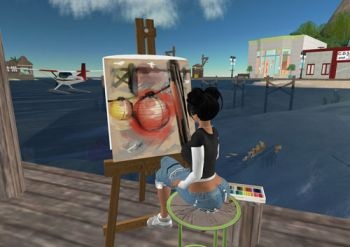 Worlds.com CEO Thom Kidrin is getting ready to sue the pants off every MMOG in existence, including World of Warcraft and Second Life, for infringing on what he claims is his company’s patented intellectual property: Scalable virtual worlds with thousands of users.

Worlds.com claims to hold a patent for the idea of virtual worlds that dates back to 1995 and that could quite literally apply to every 3-D online world currently in existence. In fact, Worlds.com has already taken one MMOG heavyweight to court: Korea-based NCsoft, the company behind games like Lineage and Guild Wars. And while legal expert Ben Buranske, contacted by Business Insider, says the wealth of “prior art” will make the case tough to prove, World.com’s court of choice, the Eastern District of Texas, is notorious for handing heavy damage awards to plaintiffs in cases like this. Nintendo was recently ordered to pay $21 million in damages after a jury in the district found the company had violated 12 patents relating to its controllers held by a small Texas company called Anascape.

“Being a foreign defendant in Texas is not a pleasant thing,” a lawyer familiar with the NCsoft case said. “The juries are, many would say, biased towards American plaintiffs and have a propensity to offer high damages. Some defendants might view them as an unfriendly jury and it might make the defendant more likely to settle.” That could be bad news for companies like Blizzard and Linden Lab, which Kidrin says he is “absolutely” going to sue if his suit against NCsoft is successful.

Worlds.com apparently came into possession of the patents by way of Starbright World, a social network for serious ill children that’s part of the Starlight Starbright Foundation. The patents don’t cover virtual worlds specifically but rather “an architecture for enabling thousands of simultaneous users in a 3D virtual space.” Lawyers from the General Patent Corporation reportedly encouraged Worlds.com management to “aggressively pursue” licensing arrangements with MMOG companies.

Kidrin says he doesn’t want to put anyone out of business, he’s simply after proper licensing fees for what he feels is rightfully his intellectual property. Given the amounts of money involved in the MMOG business, it’s a safe bet he won’t settle for token amounts.