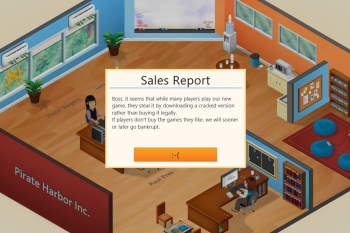 In an ironic twist, modified code in the cracked version of the game ensures that pirate’s in-game progress is constantly ruined by rampant piracy.

What happens when pirates play a game development simulator and then go bankrupt because of piracy? This is the question asked by Game Dev Tycoon developer Green Heart Games. In a curious social experiment, the developer deliberately uploaded a full, cracked version of its game to the most popular torrent trackers. The cracked version is nearly identical to the real thing except for one detail. As players spend a few hours playing and growing their own game dev company, they will start to see the following message, styled like any other in-game message:

“Boss, it seems that while many players play our new game, they steal it by downloading a cracked version rather than buying it legally. If players don’t buy the games they like, we will sooner or later go bankrupt.”

Slowly, the player’s in-game funds will dwindle, and every new game that they create has a high chance to be pirated until they eventually go bankrupt. There is no way to fight it, in an ironic twist, players of the cracked version of the game are doomed to constant failure due to rampant piracy.

But even more hilarious are the pleas for help that the pirates have posted on the official forums, not knowing that they have unwittingly outed themselves as pirates.

The developer said that it has conducted this social experiment as a way to try and open gamer’s eyes to just how damaging piracy can be. The depressing results of its own game’s day one piracy rates show that only 6.4% of people playing the game bought it legitimately.

“To the players who played the cracked version, I’m not mad at you,” says Patrick Klug of Green Heart Games. “When I was younger, downloading illegal copies was practically normal but this was mostly because global game distribution was in its infancy.” He says that the wide availability of the game online, as well as the fact that it has a free demo and comes with no DRM means that gamers these days have no excuse for pirating the game.

“If years down the track you wonder why there are no games like these anymore and all you get to play is pay-to-play and social games designed to suck money out of your pockets then the reason will stare back at you in the mirror,” warns Klugg, on a website set up to specifically target people looking for a cracked version, asking them nicely to reconsider.

“We are just two guys working our butts off, trying to start our own game studio to create games which are fun to play,” says Klugg. Amen to that brother. If you agree with him, and can spare the eight bucks, you can buy the game for Mac, Linux and Windows from the Green Heart Games website.