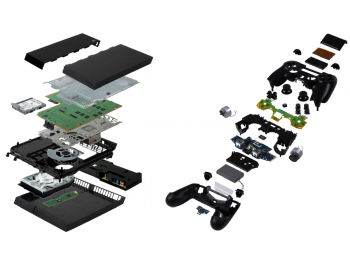 Pricing a console means balancing profit for the company and how much consumers are willing to spend. It’s no surprise that giants like Sony look to make a profit on games and controllers as opposed to the sale of the console itself. Sony will make $18 with the sale of each PS4 system, an analysis research firm IHS revealed. With a $399 retail price, the cost of the parts of the PS4 and the cost of the labor required to assemble those parts totals $381.

IHS noted how much each part cost in one system. The Advanced Micro Devices microprocesser costs $100 to build, and the 16 individual memory chips add up to be $88. IHS noted that the microprocesser chip is about three times as big as the next-biggest chip the firm had seen, and chips with a larger surface area have a higher probability of manufacturing defects. IHS estimates about one-third of the chips are defective and aren’t used, which increases the cost. The other parts in the PS4 are much cheaper. The Seagate hard drive is $37, and wireless chips from Marvell and Skyworks plus an optical drive cost $28.

The DualShock 4 is an area where Sony can make a bit more of a profit. The controller costs $18 to build, and its retail price is $60. The controller contains Qualcomm Bluetooth chips, a Wolfson Microelectronics audio chip, and a Bosch motion sensor chip.

Sony’s business practice in this regard hasn’t changed much, but the cost to make a PS4 at launch is greatly less than the at-launch price to build the PS3. Even so, Sony will be looking to push games sales to make a profit.