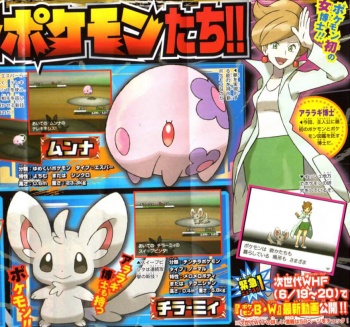 The fifth generation of the Pokemon series is the first to grab a coveted 40/40 from Japanese game uber-mag Famitsu.

Long-term Poke-fans will know that while the Pokemon series (that is, the “main” handheld games, not counting spinoffs) tends to rely on a tried-and-true formula, there are always significant differences between the generations. Mechanics are added and refined, and the entire system gets some heavy overhauls.

From the beginning, however, we were told that Pokemon Black & White versions would be trying more than a few new ideas. Not only would there be actual differences between the versions in story and layout, but the new games would have none of the old standard ‘mons. The games would feature older protagonists, a female professor for the first time in the series’ history, and were rumored to have a more involved storyline for once, too. Whereas Kanto, Johto, Hoenn and Sinnoh had all been based on regions in Japan, Pokemon Black & White‘s Isshu region is apparently the Pokemon world’s equivalent of America.

It was an attempt to rekindle the wonder that many gamers felt back with Pokemon Red & Blue – before we realized that every single cave would be filled with goddamn Geodudes and Zubats.

It looks like the attempt has paid off: Major Japanese game magazine Famitsu awarded Pokemon Black & White Versions a coveted 40/40 score, meaning that four separate reviewers each gave it a 10/10. The reviewers praised the fresh approach to the series, enjoying the new graphics, features – and yes, even enjoying all the new Pokemon. I guess not everyone hates that silly-looking otter, huh?

Black & White are the first games in the series to receive this score. Most recently, Pokemon HeartGold & SoulSilver had earned a 37/40. Earlier, Platinum took a 36/40, Diamond & Pearl took 35/40, and the third-generation games Ruby & Sapphire were only awarded 33 points out of 40.

Only 14 other games have been awarded perfect marks by the magazine, from the legendary Zelda: Ocarina of Time to the more recent Metal Gear Solid: Peace Walker.

I have to admit, I wasn’t sold on Black & White when they were first announced, but everything I’ve heard about the new games just made me more intrigued – and this is a fantastic seal on the deal. Next spring can’t come soon enough.