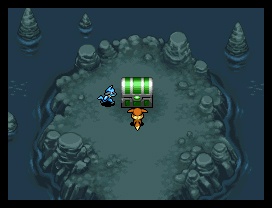 If you’re ready for yet another Pokemon game to tide you over until whenever those Gold/Silver remakes come to the West, look to October 12 for the release of the latest Mystery Dungeon game, Explorers of Sky.

The Pokemon series really is the king of repackaging. From Red/Blue to Yellow and Diamond/Pearl to Platinum, Pokemon games are remade and recycled time and time again. Now it’s time for the dungeon crawler subseries Pokemon Mystery Dungeon to get its turn as the last two Mystery Dungeon titles, Explorers of Time and Darkness, are packaged into one game with all sorts of neat stuff thrown in to make it seem like the version to have when it drops October 12.

In addition to the content from Time and Darkness, Explorers of Sky adds five new starter Pokemon that you can play as, bringing the official roster up to 19 different playable ‘Mon. If you’re out of the loop in regards to this series, yes, here you play as the Pokemon as opposed to the trainers. You team up with another Pokemon and explore mysterious dungeons roguelike-style in order to save the world. It’s kind of like Nethack, except super cute and not as excruciating.

Explorers of Sky also adds new Special Episodes that Nintendo promises will “reveal secrets about certain characters in the Mystery Dungeon world.” Apparently one of these episodes features everyone’s favorite bucktoothed, ubiquitous and completely useless and trash-tier Pokemon, Bidoof. So you fans of inferior Pokemon have a treat in store for yourselves.

Special Episodes will come built into the Explorers of Sky experience, but additional content will be available the Nintendo Wi-Fi Connection, over which you can access “special missions” and help out friends who might need a hand on a particularly tricky level of a dungeon.