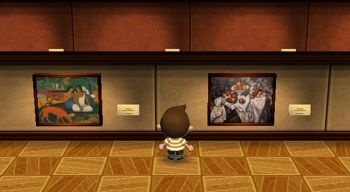 Police in Missouri have put a new twist on age-inappropriate gaming by saying there is “no reason” adults would own games like Animal Crossing unless they’re using them as pedophile bait.

The Mid-Missouri Internet Crimes Task Force is warning parents about online predators who use games like Animal Crossing: City Folk to connect with kids across the country. Parents tell their kids to never talk to strangers, but a report by ABC affiliate KMIZ says interacting with both in-game animals and other players is “the heart of the game,” and that “to really reach the next level, the game urges you to exchange letters, gifts and favors.” But what kind of favors, exactly?

The evil, child-molesting kind, apparently. “There is no reason an adult should have this game,” said Task Force Coordinator Andy Anderson. He added that adults who own Animal Crossing and similar games likely have them for “the wrong reasons.” Evil, child-molesting reasons, no doubt.

Susan Arendt of The Escapist noted that direct communication between players could only take place under certain, easily controlled circumstances. “You can’t talk to anyone unless you have their friend code,” she said, prompting at least one observer to wonder exactly how, and why, she knows so much about the game.

Anderson said it will be up to parents to keep this problem from “exploding,” not because it’s part of their inherent child-rearing responsibilities but because Sony just will not drop the price on the friggin’ PlayStation 3. Do you have any idea how much that thing costs? “The equipment is real expensive and we cannot afford to buy all of the systems and do not have the resources either to examine all of the possibilities,” he said.

Rumors that Missouri has been pestering Nebraska to go halfsies on a new Xbox 360 remain unconfirmed.