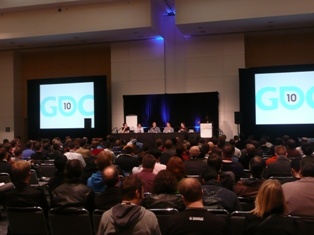 A Valve executive said that the Portal ARG was created by the game’s designers as a way to extend the story and there are some nuggets that still haven’t been discovered.

Speaking at a star-studded panel on connectivity in games at this year’s GDC, Jason Holtman, director of business development and legal affairs at Valve, revealed that there was no marketing team behind the Portal 2 ARG. It was made by the design team on the game and was an effective way to extend the game world.

“I had nothing to do with it, which I think was really important,” Holtman said. “The genesis for the idea came from the people who were working on the game. They were thinking about the people who consumed Portal. They thought about it as part of the game. They thought about it as this experience where you’re going out and talking about the game’s world.” There was not a marketing team working on it and separate team on the game. The designers really thought of it as an extension of the Portal universe.

Holtman said that was ultimately why it was so successful. “We had 2 million forum views on that thread over the course of 8 hours trying to solve that puzzle,” he said.

He also mentioned an interesting nugget about the change to the end of Portal that went live last week. “We actually didn’t decide to make that change to the original Portal until a few days before it went live,” he said. Holtman pointed out that was a benefit to the open PC platform. Valve wouldn’t have been able to push that change out so quickly to an Xbox or PS3 game.

Unfortunately, Holtman was not able to tell any hints or secrets when I asked him during the Q&A session. But he did think that there is more out there to discover.

“Some of it’s been resolved. You never know,” he said.

Also, as the moderator N’Gai Croal from Hit Detection said, “the ending was a lie.”

The “Hardcore Gamer’s IQ Test” Will Make You Feel Wussy

How Borderlands Went From Brown to Brilliant