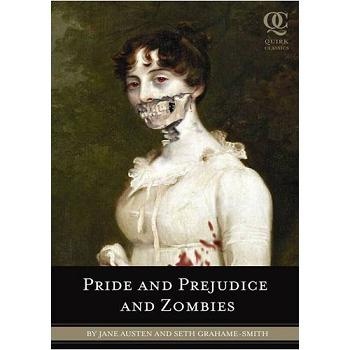 Jane Austen, meet George Romero. Seth Grahame-Smith’s Pride and Prejudice and Zombies takes Austen’s classic novel and spices it up for the modern zombie-loving age, an act sure to have the beloved novelist spinning in her grave … or climbing out of it.

The official description on the book’s Amazon.com listing reads as follows: “‘Pride and Prejudice and Zombies’ features the original text of Jane Austen’s beloved novel with all-new scenes of bone crunching zombie action.” Now, this isn’t the first time that the author (of the zombie parts, not the rest of it) has tackled the living dead: Seth Grahame-Smith’s other writing credits include How to Survive a Horror Movie.

I’m honestly kind of torn here. On the one hand, assuming I’m reading this correctly, it’ll be the same Pride and Prejudice that people have read and loved for almost two centuries. I don’t think Grahame-Smith is going to be changing too much of the story – Elizabeth and Mr. Darcy are going to end up together in the end; they’ll just have to crack some zombie skulls together along the way. So there’s kind of no point to it, since it (by its very definition) can’t affect the plot.

On the other hand? It’s goddamn hilarious. The fact that somebody thought, “Hey, I freakin’ love this masterpiece of English literature, but you know what it really needs? Zombies!” … well, that’s going to cheer me up for a good few days at the very least. It is a sad fact that classical literature is largely devoid of the living dead. Well, other than Dracula. … and Frankenstein.

While zombies aren’t quite on the level of giant robots when it comes to making everything they’re in exponentially more awesome, the sheer audacity of the idea is enough to make me want to pick up Pride and Prejudice and Zombies when it hits shelves in May. How about you?

(Thanks to L.B. Jeffries for the tip!)