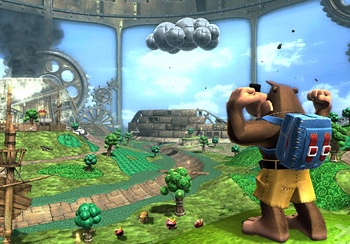 Anyone who downloaded the Banjo Kazooie: Nuts & Bolts demo and played it on a standard definition TV likely found the eye-straining font size to be a source of frustration. Readability was less of an issue for HDTV owners. Though Rare initially stated the text issues would persist in the retail version, it is now working on a solution to the problem, according to Rare community manager, George Kelion.

“It has come to our attention that people are experiencing subtitle readability issues with Banjo Kazooie: Nuts & Bolts on standard definition TVs,” Kelion informed Rare fan site MundoRare over the weekend. “We would like to assure you that contrary to earlier reports, we are aware of the issue and currently working on a title update to be released within the next 30 days that will fix it for those with standard definition TVs. We’re committed to ensuring all fans of the franchise are able to have the best experience possible with Banjo Kazooie: Nuts & Bolts.”

In his previous response, Kelion said the issue would not be fixed due to the time, resources, and expense required. Had it not been for the outcry from players, this major oversight for such a high-profile game may have gone uncorrected, but it seems Banjo fans managed to raise enough of a fuss to get changes made. The people have spoken.