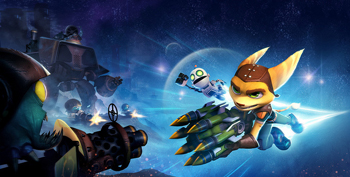 Insomniac Games takes the series back to a “classic feel” while adding online play.

Ratchet and Clank have been a staple of Sony’s gaming library for a decade, and in celebration of the milestone, Insomniac Games has plans to re-release the heroes’ first three adventures as part of the Ratchet & Clank Collection. But that’s old news, and you already knew that. The new news is that the collection will now include Insomniac will be releasing Ratchet & Clank: Full Frontal Assault, an all-new adventure for the duo.

Insomniac’s President and CEO Ted Price shared only a few details when revealing the title, promising fans that it would return “to the series’ classic feel, camera, controls and weapons, while innovating and giving you a whole new way to play.” Full Frontal Assault will also feature online play, though no details on the mode were provided.