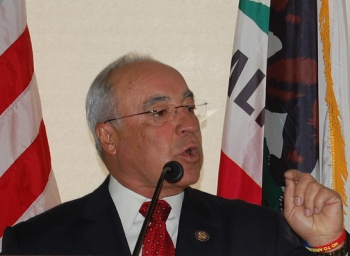 Congressman Joe Baca, the man who wants health warning labels on videogames, is “disappointed” by the Supreme Court’s decision to let the game industry continue to peddle its heinous filth to children.

Joe Baca thinks videogames are dangerous. Dangerous enough that he has twice introduced a bill that would require all videogames rated T (Teen) or higher to carry health warning labels, like cigarettes or assault rifles. Actually, I don’t think assault rifles carry warning labels or even ESRB-style age recommendations [and isn’t that ironic], but that’s neither here nor there. The point is that Baca doesn’t like videogames, and he doesn’t like yesterday’s SCOTUS ruling that they’re entitled to the same First Amendment protections as other media.

“I am disappointed the multi-billion dollar video game industry will continue to go unchecked in its ability to profit from selling heinous depictions of violence and sex to minors,” Baca said in the wake of the ruling. “Unfortunately, the industry is still not doing enough to provide parents with accurate information regarding the content of many games.”

Of course, that ignores the fact that the videogame industry does more than any other entertainment business to keep parents educated and informed about its products, and that videogames have a higher level of age rating compliance than any other medium on the market. It also overlooks the inconvenient point that while videogames have become more ubiquitous across all levels of society, crime rates have actually declined, and that for all the dangers of “interactivity” there is no actual evidence that it’s any more harmful than the consumption of any other form of entertainment.

But hey, why let things like “facts” get in the way of hysterical pandering, right? To that end, Baca indicated that he would continue to pursue his quest to mandate warning labels for games. “I continue to sponsor and advocate for legislation in the House of Representatives that would mandate all videogames with a rating of ‘Teen’ or higher be sold with a cigarette style warning label, citing the health risks of excessive exposure to violent media,” he said.

Crush Bungie at Halo and Win Some Meat