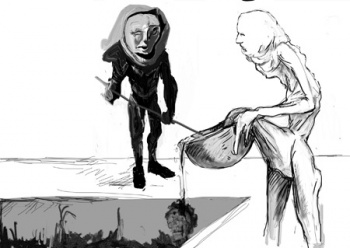 The Resident Evil creator’s new studio is either working on something very strange, or someone in the company just wanted to creep everybody out.

Shinji Mikami, the creator of Resident Evil, started up a new studio this year called Tango Gameworks that was recently acquired by Bethesda Softworks parent ZeniMax. Tango’s first project is still under wraps, but a few images have popped up on the Tango Gameworks blog that may give us a hint towards what it could be.

If the images are concept art of some kind, it means that Tango is working on something extremely creepy. It’s drawn by someone named O-sensei/teacher-O and isn’t necessarily horrifying, but it still has a depraved style.

The first piece shows two humanoid creatures that definitely aren’t actual humans. One of the humanoids is wearing a hood and dressed in all black, and he appears to be in a position of authority over the other humanoid. The second humanoid has a form closer to that of an alien, with skinny arms and a torso that is partially inside of a bowl. That bowl is being poured into what looks like a swimming pool. Like I said, extremely creepy.

The second image shows two different types of bugs. One appears to be a cockroach with a human face that looks like it has a nasty shiner. The other is a similarly dreary grasshopper that may be hiding something beneath its exterior wings. The image of the bugs is somewhat disturbing, but normal compared to the other piece. 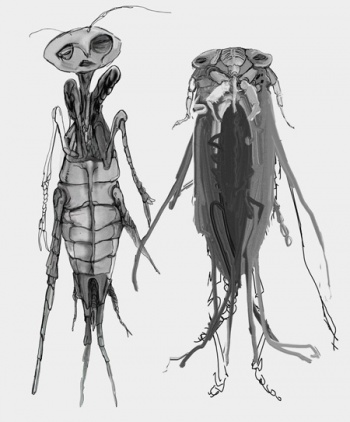 Tango’s upcoming projects webpage is still blank, so these two images are the only possible hints we have about what the studio is working on for now. They could be completely unrelated to a Tango Gameworks project, but they’re too weird to ignore. Mikami is working on Shadows of the Damned for Grasshopper Manufacture, so the grasshopper could refer to that project somehow, but that’s the only connection I’m able to make. Is Tango’s first game going to be about filling a swimming pool as a strange alien and beating up cockroaches?