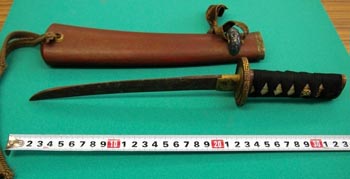 A short reverse-blade compared to a fictional sakabato in Rurouni Kenshin was found in Japan’s Chiba Prefecture.

An unusual sword dating back to the Edo period was discovered in a family storage cellar of Shiroi City in Japan’s Chiba Prefecture. Now donated to the prefecture’s cultural archive, the discovered sword has been compared to the reverse-blade sakabato seen in the Rurouni Kenshin manga and anime series, according to the Asahi News.

Rurouni Kenshin tells the story of a former assassin named Himura Kenshin, who now travels as a wanderer. Wishing to kill no more, Kenshin uses a sakabato, a fictional sword that has a reversed blade. Instead of the outer edge of the sword, the side that faces the opponent, being sharp, the side of the blade facing the wielder is sharpened, making the opponent-facing edge dull.

Until now, there had been no record of such a sword existing in Japanese history. The blade was discovered in October to much confusion and surprise. Called a kogatana (short katana), the reverse-blade only measures 11 inches total, with the blade being 8.6 inches long. Found in an old cellar, the blade is engraved with dragons, and dates back to as far as the Edo period (1603 to 1868), the period before the Meiji Restoration in which Rurouni Kenshin takes place.

Reverse-blades found today are contemporary swords for collectors – except for this kogatana. They would have been unusual and even dangerous to use in reality, resulting in very different injuries for opponents while risking the wielder’s safety.

Cards Against Humanity Goes Wibbly-Wobbly All The Way To Gallifrey