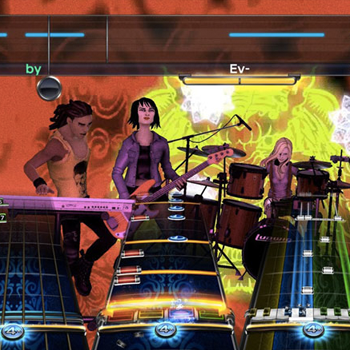 Harmonix is thinking about bringing their peripheral-focused games like Rockband to the new generation of consoles.

Harmonix is promoting their upcoming motion-controlled games Fantasia: Music Evolved and Dance Central Spotlight, which are set to release later this year, but there are some of us wondering if we’ll ever see the return of the peripheral-styled games Harmonix became known for.

In a recent interview Harmonix CEO Alex Rigopulos gave fans hope of the return of the Rockband series for this generation of consoles (Xbox One, PlayStation 4, and Wii U).

He began explaining how Harmonix continues to experiment with the idea of what is a music game, and what it means to mix emotions and interactivity with the power of music. “In the past we have done instrument performance simulation, and we will in the future bring this kind of play experience back, and then another version of that was dance, and now a new version of that with Fantasia is this kind of rhythmic, gestural, spell-casting and then a manipulation of music.”

When pushed to address when we might be seeing video games with plastic instruments again, “We think about it all the time because we love Rock Band, and we’re waiting for just the right moment in the new generation of consoles to bring it back.” He stresses, “Someday, when the time is right, we will want to bring it back.”