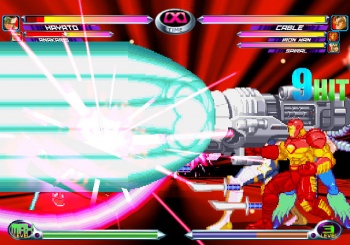 Word on the street is that the Street Fighter, Tekken and Soul Calibur casts will be mixing it up in not one but two crossover games.

The EVO tournament series is one of the biggest – if not the biggest – fighting game events of the year, and it was no surprise that the people who made the games in question were out there in force. During a speech, Namco Bandai’s Katsuhiro Harada (producer of Tekken 6) and Capcom’s Yoshinori Ono (producer of Street Fighter IV) joked with the crowd and offered a teaser: There would be a fighting game trailer unveiled Saturday, July 24th, at San Diego Comic-Con.

GameInformer did some investigating, and turned up an interesting claim: As one might expect, Ono and Harada were teasing a new “Versus” game in the style of Marvel vs. Capcom and Tatsunoko vs. Capcom. Only they weren’t just teasing one game, says GI, but two of them.

According to GI’s sources, Namco and Capcom are currently collaborating on a pair of games – Namco will be developing Namco vs. Capcom, and Capcom will be making Capcom vs. Namco. Both games will supposedly play in the style of their parent company’s premiere series (Tekken and Street Fighter respectively), goes the rumor, so expect NvC to be a 3D juggle-tastic brawler where CvN will be a 2D affair more about special and super moves and aerial strings.

As always, this is a rumor so take it with a grain of salt, but it’s a really cool rumor. The last time the two mega-developers mixed it up was in the strategy game Namco x Capcom, but their properties are just ripe for a crossover fighter.

Capcom’s Versus games mean that, if true, we have a pretty good idea of what games might be represented in its roster: Street Fighter, Darkstalkers, Mega Man, Devil May Cry, and maybe some Dead Rising and Resident Evil (sadly, I won’t hold my breath for Ace Attorney).

Namco, on the other hand, has its fighting game series like Tekken and Soul Calibur, but also a staggering amount of other franchises and IPs that might work well in a crossover fighter. Just think about it: Tales of and Xenosaga are just begging for the action treatment, and there’s always the off chance that they could throw Pac-Man and the Katamari prince in there to mix it up (super attack: Katamari Roll).

Personally, I’m holding out for a Gundam myself. And now I’m going to be sad if this isn’t true – but we’ll find out one way or another this Saturday.