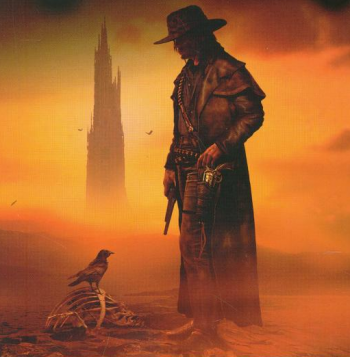 News pouring out of Hollywood makes it sound like the films based on The Dark Tower aren’t even going to get a chance to get off the ground.

Stephen King’s The Dark Tower series has been in pre-production for a film adaptation since last year, with a planned release date in Spring of 2013. However, there’s bad news for fans of the books: Movie insiders are reporting that the project is being abandoned.

The project, which is being headed by Ron Howard, has been seen by many folks in the industry as a risky venture thanks to its massive scale. King’s plot line, which spans several books and short stories, is too big for any one movie; as a result, the adaptation would cover three films and two television series.

Now, though, the adaptation is facing a very serious possibility of being nixed:

Universal Pictures has put pre-production staff on hiatus as they discuss ways to bring down the budget of the ambitious adaptation of the Stephen King novel series The Dark Tower. Talks are ongoing between studio brass, director Ron Howard and his Imagine Entertainment, and writer/producer Akiva Goldsman about how they will proceed.

At the moment, it sounds like there’s still a possibility that the project might work out and fans will get to see the story acted out on both the big -and small- screens. In the meantime, you can always check out the comic adaptation instead (though you may want to wait until Marvel publishes the ~900 page omnibus in September).