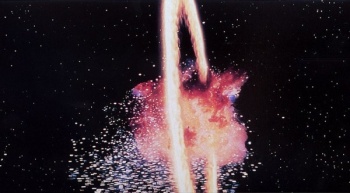 According to Green Hornet‘s Seth Rogen, the Star Wars auteur believes the world will end next year.

Seth Rogen was recently interviewed and told an anecdote about a puzzling conversation he once had with George Lucas. Rogen was in an unspecified meeting with Lucas and director Steven Spielberg when the Star Wars visionary got sidetracked and began to discuss the end of the world. Rogen tells the Toronto Sun, “George Lucas sits down and seriously proceeds to talk for around 25 minutes about how he thinks the world is gonna end in the year 2012, like, for real. He thinks it.”

Apparently it’s just Lucas that holds these beliefs, as Rogen goes on to say, “all the time Spielberg is, like, rolling his eyes, like, ‘My nerdy friend won’t shut up, I’m sorry…'”

If, reading this, you think it sounds like an exaggeration or joke, you’re not alone. Rogen himself didn’t believe it at first, telling the Sun he thought Lucas “was joking… and then I totally realized he was serious and then I started thinking, ‘If you’re George Lucas and you actually think the world is gonna end in a year, there’s no way you haven’t built a spaceship for yourself’… So I asked him… ‘Can I have a seat on it?'” Lucas denied the existence of any such vehicle, but Rogen has his suspicions. Should we be faced with the apocalypse next year, he expects Lucas to hop the Millennium Falcon waiting in the garage, complete with driver. Rogen concluded, “it’s gonna be him and Steven Spielberg and I’ll be blown up like the rest of us.”

Source: The Toronto Sun, via MovieLine

“He was not serious when he talked about the end of the world in 2012 but he is an adamant believer that the world is flat, that Stonehenge was built by aliens, and that the sun revolves around the Earth. These are among the many subjects he commonly discusses at length with Elvis, who he’s going to digitally insert into Indy 5 along with a roster of famous dead actors.”

Seth Rogen could be exaggerating, but I still wouldn’t be surprised if Lucas were prepped and ready to escape this planet for a galaxy far, far away.

Can The Dark Knight Rises Rise Above Its Predecessors?

Robert Downey Jr Out, Johnny Depp Maybe In for Oz, The Great and Powerful