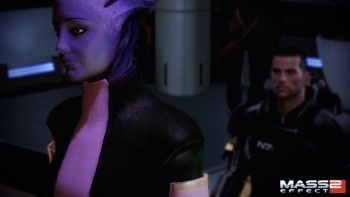 There’s a rumor going ’round that Liara T’soni, the blue-skinned biotic who was too busy to come along for the ride in Mass Effect 2, will turn up in a future DLC release.

Liara was a big help in saving the galaxy in the first Mass Effect but when it came time to do it again in the sequel, she’d already made plans. In the years between the two games, she’d become embroiled in some kind of intergalactic slap-fight with the Shadow Broker, the secretive – some might even say shadowy – buyer and seller of information. Apparently, getting a little payback is more important than, you know, ensuring the continuation of life as we know it.

But according to Thepwnage.com, “no” actually just meant “not right now,” as evidence has been discovered that she may be joining the crew after all through the magic of DLC. Audio files featuring Liara talking about the Shadow Broker have been found in the game, with interesting names like “liara_dlc_lead_in” and “liara_norm_intro,” with “norm” presumably referencing the Normandy. And while it’s obviously just speculation at this point, the site also points out that similar audio files for Kasumi were found long before BioWare acknowledged her existence.

When contacted, EA said only that it doesn’t comment on “rumors or speculation.” Fortunately, I do, so let’s get to it.

Liara’s history in the intervening years between Mass Effect 1 and 2 was apparently explored in the four-issue Mass Effect: Redemption comic series but remains a complete mystery to those of us who didn’t bother reading it. There’s obviously a lot of potential there for some very solid DLC; on the other hand, having already established that the Shadow Broker is a character on par with the Illusive Man hiimself, the prospect of Liara replacing him in a two-hour DLC release seems a bit too breezy.

Is turning the near-mythical Shadow Broker into just another goon and then bumping him off in a glorified loyalty mission doing a disservice to the character and the game? Or are we so happy to have Liara back in the crew, and perhaps the sack, that we don’t care about such things? I was never much of a fan of the character, but if bringing another biotic aboard means I can finally blow Jack out an airlock, you can count me in.

The hidden audio files can be heard, spoilers and all – you’ve been warned! – on YouTube.

Buy Some Really Freaky Xbox 360s for Charity Down Under