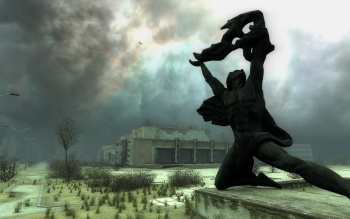 An ugly rumor coming out of Ukraine claims that S.T.A.L.K.E.R. 2 is canceled and developer GSC Game World has been closed down.

This is seriously disappointing news if it turns out to be true. According to a Google translation of Ukrainian News, GSC Game World founder and CEO Sergei Grigorovich has decided to shut down the company. What led to the decision isn’t clear, although it appears that someone – perhaps Grigorovich, perhaps employees at the studio – weren’t happy with the progress being made on S.T.A.L.K.E.R. 2. The closure of the studio, of course, means that S.T.A.L.K.E.R. 2 is dead in the water.

And sadly, it looks like it is true: GSC initially denied the report via Twitter, but that tweet was quickly deleted and then followed by another from GSC Director Dmitri Bourkovski, who wrote, “not PR. GSC closed.” In response to inquiries from Rock, Paper, Shotgun, GSC said only, “Sorry, no comments at this point,” which is never a good sign.

On the other hand, this wouldn’t be the first time that an eastern European game company pulled a bizarre “we’re going out of business!” stunt to drum up publicity. It’s a faint hope – a very, very faint hope – but given how much I’ve been looking forward to S.T.A.L.K.E.R. 2, I’m going to cling to it.

UPDATE: It turns out that Dmitri Bourkovski, who earlier “confirmed” the closure of GSC on Twitter, doesn’t actually work for GSC Game World at all; his Linkedin profile lists him as the “Head of Publishing, Games Division” at Mail.ru. He also told Beefjack that he has “no connection” with the project and was only tweeting about what he’d heard. An interesting twist! We’re waiting for an official response to our inquiries from GSC and will update again when we hear more.

UPDATE 2: Sergey Galyonkin, marketing director at 1C Multimedia [1C Company published the S.T.A.L.K.E.R. games in some regions] has blogged about the closure of GSC, which you may or may not take as confirmation as you see fit. “GSC is closed, a fact confirmed by all. The team is almost completely dissolved, the state has only a few people,” he wrote, obviously Google translated.

Galyonkin said a deal to bring the S.T.A.L.K.E.R. series to consoles fell through and the projected sales for a PC-exclusive post-apocalyptic shooter based in eastern Europe weren’t enough to justify the expense of developing the game. There were also apparently concerns, as stated earlier, about the current state of the game’s development and some claims that GSC Game World chief Grigorovich is just “stupidly tired.”

We’re still awaiting official word from GSC but at this point, it sounds very much like that’s that.