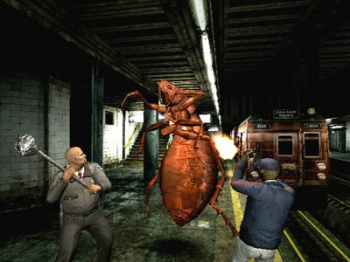 Gamers could soon be returning to the mean, zombie-filled streets of Resident Evil’s Raccoon City, and bringing some buddies along with them too.

Aside from the name and the developer, there aren’t a lot of details about this alleged game. Taking Slant Six’s previous games into account – three SOCOM titles since its creation in 2005 – it’s possible it’s some kind of military-style shooter, perhaps staring either an actual military presence or one of the Umbrella paramilitary units, like the team Carlos Oliveira belonged to in Resident Evil 3. Of course, this is all just speculation with nothing but fairly thin circumstantial evidence to back it up.

The home page on the Slant Six website says that the studio is currently working on a “new publishing partner on a world class franchise,” and earlier in the year, it was looking to employ a Japanese translator. Moreover, several Slant Six employees list an “unannounced action game” for the PS3 and Xbox 360 on their LinkedIn profiles. Again, this is hardly conclusive, but it would all fit if the rumors prove to be true.

The idea of a full-on, multiplayer Resident Evil certainly isn’t outside the realms of possibility, Capcom has tried it before with Resident Evil: Outbreak on the PS2. It also wouldn’t be the first big franchise that Capcom has farmed out to a Western developer recently. There’s nothing that sets off alarm bells, or is clearly false, but for now, we’re just going to have to wait for more information. We’ve contacted Slant Six for comment and will update if/when they respond.