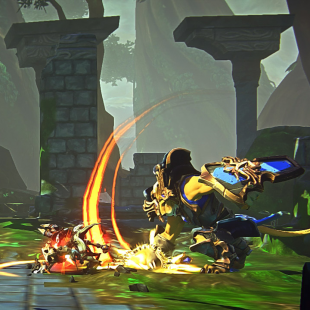 Back in November 2013, SOE president John Smedley excited PS4 owners and MMORPG fans alike with some not-so-subtle hints that the already anticipated EverQuest Next would be releasing on the PS4. Now however, console gamers eager to give the game a go can officially celebrate thanks to recent Reddit Q&A session where Smedley confirmed that a PS4 version is in the works.

Responding to a user question about the previous PS4 teases, Smedley replied that “[SOE] will absolutely be bringing [EverQuest Next] to PS4.” That wasn’t the extent of Smedley’s reveals either. While he skirted around actually confirming anything, another response indicated there exciting things on the horizon for fans of the now defunct MMO Star Wars Galaxies. “[Star Wars Galaxies] players- our next game (not announced yet) is dedicated to you,” he said. “Once we launch it… you can come home now.”

Smedley also provided more details about when shooter fans could expect the PS4 version of PlanetSide 2 to release, saying that it would arrive on the console sometime during the “first half of this year.” All-in-all, Smedley’s responses revealed some interesting tidbits that are bound to excite many MMO fans. If nothing else it’s a nice contrast to other SOE announcements like the recent reveal that the company will be shutting down several of its less prominent MMOs later this year.