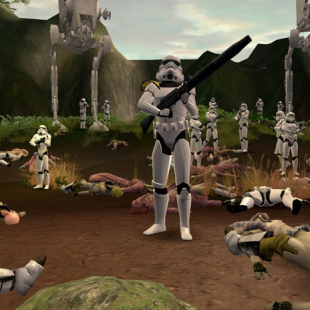 Arguably one of the most painful MMO closures of the past few years was Star Wars Galaxies. While the game wasn’t always beloved by all, it managed to accumulate a sizable and dedicated fan base that was heartbroken when Sony Online Entertainment announced that it would be shutting down in 2011. That being the case, SOE president John Smedley recently revealed that the company has an unannounced title in the works that, according to his statement, will be “dedicated to” fans of Star Wars Galaxies.

According to Smedley, the new MMO will be “a game that many of the old [Star Wars Galaxies] players will feel right at home in.” The “at home” appeal will apparently come from the new game’s freedom-based mechanics. “It’s got a heavy amount of sandbox elements that made SWG what it was,” explained Smedley. Sadly, Smedley was also able to confirm that the new MMO is “not a Star Wars game.

Not that we were expecting it to be one. It wasn’t that long ago, of course, that Electronic Arts signed a long term deal with Disney giving it exclusive rights to make Star Wars video games. Put shortly, it would have taken some intense finagling on SOE’s part to get the required permission needed to make a new MMO based in that universe. Add in the fact that EA is still trying to make money off of its own extravagantly expensive Star Wars MMORPG and we feel safe in saying that a Star Wars Galaxies 2 was never going to happen even if SOE wanted to make it. That said, the absence of a preexisting license almost makes this new game more interesting, as its creative options are arguably wider. In turn, we’ll be watching and waiting to see what Smedley and friends have up their sleeves.