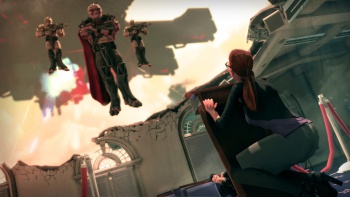 A Lamborghini Gallardo, you say? Cheap at twice the price.

How rich are you? How big a Saints Row IV fan are you? The Super Dangerous Wad Wad Edition aims to put you to the test, if you have $1 million to spend on a very special preorder. Sure, you get the game – the Commander in Chief edition, actually – plus a full size replica of the Dubstep Gun. But that kind of swag’s pretty dull; what else is Deep Silver prepared to offer? Well, how about:

? A full day of spy training.
? A trip to space with Virgin Atlantic.
? One year’s membership of E25 Super Car Club and a Lamborghini Gallardo to make it worthwhile
? Plastic Surgery of the purchaser’s choice.
? A shopping spree with a personal shopper to create the ultimate Planet Saints capsule wardrobe.
? 7 nights for two at The Jefferson Hotel in Washington.
? Hostage rescue experience.
? A brand new Toyota Prius and insurance to give something back to the environment.
? 7 nights stay in the Top Royal Suite at the Burj-al-arab with flights for two.

You get your money’s worth. There are one or two conditions, among them that “Koch Media especially reserve the right to remove or amend contents of the Super Dangerous Wad Wad Edition.” Not that Koch is worried, goodness gracious me no, but you can never be too careful. There just might be someone out there mad enough to do it, and it’s not beyond the realm of possibility that this little stack of goodies might total more than the $1 million Koch’ll get paid for it. Not that anyone’s mad enough to buy it. Not that you’re mad enough to even think about this preorder.

Well, probably not that mad.