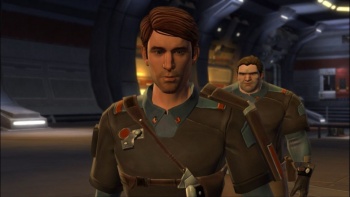 Bioware says that same-sex relationships will be coming to Star Wars: The Old Republic after all, as a “post-launch feature.”

It got ugly in a hurry way back in April ’09, when a Bioware forum moderator put the kibosh on a discussion about same-sex relationships in Star Wars: The Old Republic by saying that terms like “homosexual,” “gay” and “lesbian” – and I quote – “do not exist in Star Wars.” The statement was silly enough in itself and especially hard to swallow coming from a representative of a company known for incorporating same-sex romance options in games like Dragon Age and Mass Effect, but that appeared to be the final, bottom-line decision – until a couple of days ago, when BioWare did an about-face on the matter with an “official statement on same gender romance arcs in Star Wars: The Old Republic” posted on The Old Republic forums.

“Due to the design constraints of a fully voiced MMO of this scale and size, many choices had to be made as to the launch and post-launch feature set. Same gender romances with companion characters in Star Wars: The Old Republic will be a post-launch feature. Because The Old Republic is an MMO, the game will live on through content expansions which allow us to include content and features that could not be included at launch, including the addition of more companion characters who will have additional romance options.”

“Post-launch” is admittedly not the most precise time frame but it’s a lot better than a flat “not gonna happen.” More to the point, the simple acknowledgment that homosexuality does in fact exist in the Star Wars universe is a much-needed admission from Bioware that its initial handling of the issue was way off-base. I don’t see videogame romances as something worth getting terribly worked up about, but denying the very existence of homosexuality is a real slap in the face for an awful lot of people.

Reaction to the decision has come fast and furious, as you might expect. The original thread announcing the change of heart rocketed to 326 pages in less than 48 hours, after which it was closed for exceed thread length thresholds; a new thread, currently at 39 pages and growing, has taken its place.

Avast! Developers Released Pirated Version of Their Own Game