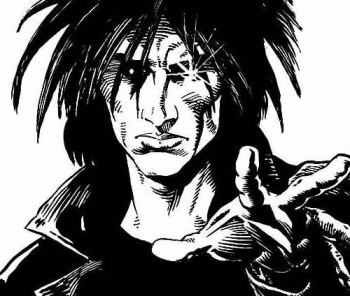 Neil Gaiman’s Sandman is going to get a big screen adaptation, after 20 years of trying.

“Has anyone told Cain that Joseph Gordon-Levitt is going to produce and possibly star in a movie version of our lives?”

“Good. Abel has enough troubles as it is.”

If you’re a comic fan of the 1990s, then it’s time to break out the bubbly: Neil Gaiman’s Sandman will finally be getting a film adaptation, after 20-odd years of trying. Gordon-Levitt will be working with Neil Gaiman himself, as producer, to bring this epic to life. The Dark Knight‘s David Goyer will be handling the screenplay. Cain may be upset – exposing secrets really isn’t something he tolerates – but the rest of us have every reason to rejoice.

Initial reports had Gordon-Levitt as the director and star as well, but the Inception actor’s only confirming the producer role. Gordon-Levitt as Morpheus, though? Hmmmmm. Could be very interesting …

No, we don’t know which part of the story Gordon-Levitt’s team will be focusing on. If it’s any help, he’s been using the hashtag #Prelude in his Tweets, which may be a Preludes and Nocturnes reference.