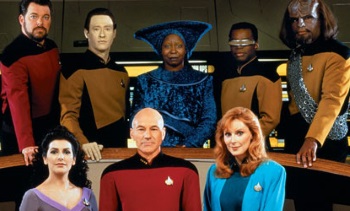 The mockumentary-style book will recap episodes from the @TNG_S8 Twitter and add illustrations, trivia, set photos, and behind-the-scenes looks at the never-aired satirical eighth season.

A Ferengi attracts the Borg towards a colony he wants to loot. Riker's replicator catchphrase, "Steak, for mouth, hot," needs work.— TNG Season 8 (@TNG_S8) May 15, 2013

McMahon told StarTrek.com, “I thought it would be fun to create an artifact from an alternate version of our universe: a tongue-in-cheek guide to the production of an — admittedly silly — season of TNG. I had a great time taking the tone of the jokes in @TNG_S8 and applying them to the expanded format of a guide, which gave me room for crazier episodes, dialogue, trivia, and plenty of Riker. I hope fans enjoy laughing with Geordi, Data, Worf and good old Barclay as much as I enjoyed writing their antics.”

Picard must choose: caulk the Enterprise and float it across a tachyon river, or attempt to ford it. Barclay gets dysentery.— TNG Season 8 (@TNG_S8) July 29, 2013

As a huge Star Trek fan, the @TNG_S8 Twitter is one of my favorite things on the Internet. I can’t wait to see which Season 8 episodes McMahan puts in the book. If you’ve ever watched an episode of Next Generation, it’s worth some time scrolling to read all of the ridiculous plots awaiting the crew of the Enterprise, and several gruesome fates for poor Lieutenant Barclay.

Play The Cones of Dunshire at Gen Con Charity Event

Complaints Lead to Changes in FX’s The Strain Billboards