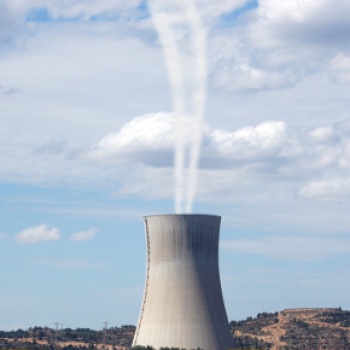 The completed design could be one of the cheapest forms of energy around.

A group of Canadian scientists are working on a power plant that will use a controlled tornado to drive turbines, and they’re calling it the Atmospheric Vortex Engine (AVE). Essentially, the AVE works by pulling hot, humid, low air into itself and creating a vortex – approximately the way a tornado works, this air makes a major temperature difference between the engine and the atmosphere above, making a vortex extending into the atmosphere. The finished plant would have a diameter of about 100 meters, and would produce 200 megawatts of electrical power. That’s about the same as a traditional coal-fired fossil fuel plant. Comparably, the AVE wouldn’t produce any carbon emissions and wouldn’t require a fuel storage facility. It’s estimated that the AVE would cost about 3 cents per kilowatt hour, which ranks it among the cheapest forms of energy.

The idea was created by an engineer named Louis Michaud from Western University, and is being funded by the Thiel Foundation. “The power of a tornado is undisputed,” said Louis Michaud. “My work has established the principles by which we can control and exploit that power to provide clean energy on an unprecedented scale. With the funding from Breakout Labs, we are building a prototype in partnership with Lambton College to demonstrate the feasibility and safety of the atmospheric vortex engine.”