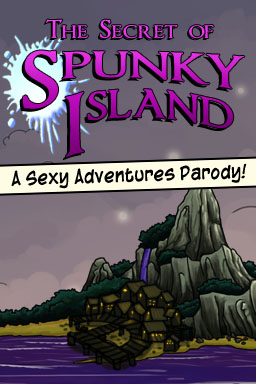 Grimmstone’s version, titled “The Secret of Spunky Island,” has a plot that doesn’t seem all that different to that of the original game. Shortplank Hardwood has to complete three simple trials in order to become a pirate, which result in his fateful first meeting beautiful Governor of Scrumm Island, Molly Rhider, as he tries to steal an idol from her house. Sadly, Shortplank’s piratical aspirations are interrupted by the appearance of the evil LeBonq and his army of ghost pirates, who all have just one thing on their minds.

Spunky Island’s gameplay is rather similar to Tetris, as blocks fall from the top of the screen and the player only has a limited time in which to figure out what to do with them. There is a twist however, as rather than attempt to make lines, the player is trying to align body parts. Each block has a character on it, and the aim of the game is to maneuver the blocks into various X-rated positions. The action is presented as a movie shoot, so by making connections, you move on to different scenes.

As adult material goes, it’s not likely to get too many people hot under the collar, but it’s not hard to smile at how lovingly tongue-in-cheek the whole thing is.