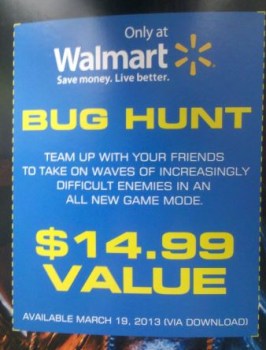 Sega has announced the first DLC pack for Aliens: Colonial Marines as well as a “season pass” that will grant discounted access to all four planned expansions.

With Aliens: Colonial Marines just a few days away, Sega has taken the wraps off the first DLC release for the Gearbox-developed xenomorphic shooter. Bug Hunt will add a new multiplayer mode to the game in which players must face off against increasingly difficult waves of enemies in three new maps based on the classic sci-fi war flick Aliens.

Pricing for Bug Hunt wasn’t revealed but Sega also announced that gamers can get a discount on it and the next three DLC releases – whatever they may be – by springing for a “season pass” for $29.99 or 2400 Microsoft points, which the company said represents nearly 40 percent off the individual purchase prices.

That could lead one to assume that the individual DLC packs will cost $9.99/800 Microsoft points, although that really stretches the definition of “almost 40 percent,” but a Walmart poster spotted yesterday by a Gearbox forums user claims it’s actually a “$14.99 value.” The poster also revealed that the Bug Hunt DLC is scheduled to come out on March 19 and, if you preorder from Walmart, you’ll get it free, which takes a substantial bite out of the value of the season pass.

Aliens: Colonial Marines comes out on February 12 for the Xbox 360, PlayStation 3 and PC. A Wii U version is also in the works.