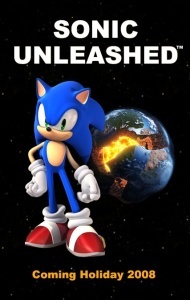 Sega has officially announced the latest chapter in the Sonic the Hedgehog saga, a new and unique high-speed journey around the globe called Sonic Unleashed.

The confirmation of the game follows a leak on Sega’s FTP server in late March which first uncovered details of the upcoming game. Unconfirmed at the time, the Sonic Unleashed title has now been made official, although details of the game appear to be considerably different than those indicated by the leak. In the new game, Sonic will have to race against time and complete unique new challenges to collect the power of the chaos emeralds and reassemble the pieces of the world that have been broken apart by the evil Dr. Eggman.

Along with Sonic’s trademark high-speeds, Sonic Unleashed will also feature combat options, new movement and functional abilities and changing day and night gameplay across the seven continents of the world. The proprietary new Hedgehog Engine upon which the game is built allows for seamless 3-D to “classic 2-D” camera transitions, impressive new lighting capabilities and other technology “tailor made for Sonic’s new speed capabilities.”

“It is an exciting time for the Sonic franchise as we look to reinvent our hero while staying true to the spirit of what made him an industry icon,” said Sean Ratcliffe, Sega of America’s vice president of marketing. “Sonic Unleashed will introduce a new, unexpected storyline along with innovative gameplay that compliments traditional skills and features, allowing players to experiment and engage in new ways.”

Sonic Unleashed is currently in development for the Xbox 360, Wii, PlayStation 2 and PlayStation 3 consoles, and is scheduled for worldwide release in time for Christmas 2008. For more information, roll on over to Sega’s official Sonic Unleashed website.