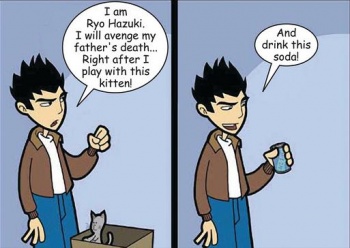 Gamers aren’t the only ones who want the Shenmue series to continue – but poor sales make it hard for Sega to justify a revisit to the franchise.

Those cruel bastards at Sega must be having the time of their lives playing with the hearts of their long-time fans as of late: First the potentially Sonic-Cycle-breaking Project Needlemouse that may or may not be Sonic 4, and now beloved cult classic Shenmue?

In the annual Japanese developer interview issue of Famitsu 360, Sega discussed the Shenmue franchise, dormant since 2002’s Shenmue II. While the people who played the games generally enjoyed them for the most part, the problem was that there were simply too few of them – poor sales mean that the series’ story has languished in limbo along with protagonist Ryo Hazuki for the better part of a decade.

This doesn’t mean that Sega doesn’t think about doing a Shenmue III, of course – the developers certainly do, and were quick to assure fans that they would love to revisit the franchise if the chance came up. Of course, those aforementioned poor sales are the main sticking point: Neither Shenmue nor Shenmue II sold well enough to warrant a new game.

It might still happen someday, but for the moment, this is just Sega toying with the hearts of Shenmue fans. Meanies.