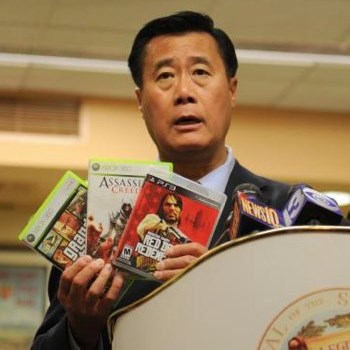 Leland Yee, the Senator behind California’s failed anti-video game law, has been arrested by the FBI and indicted on charges of public corruption.

California Senator Leland Yee has long been a crusader against violence in video games, and was a driving force behind the state law banning the sale of M-rated video games to minors that was ultimately overturned by the Supreme Court of the United States. But now he’s headed for a different kind of court, as he’s been indicted on charges of public corruption by the FBI.

KGO-TV in San Francisco reported that the FBI executed a series of search warrants this morning in a “widespread sweep involving suspected gang members.” Yee was taken into San Francisco’s Federal Building in handcuffs, according to KCRA.com, and a raid was conducted on his office; FBI agents removed computers and documents while California Highway Patrol officers remained stationed outside.

Corruption among public officials isn’t something that normally falls on our radar but Yee is an exception thanks to his dogged crusade against violence in video games. In response to the SCOTUS decision to strike down the California video game law, Yee said, “Wal-Mart and the videogame industry will continue to make billions of dollars at the expense of our kids’ mental health and the safety of our community” and added that the court had “put the interests of corporate America before the interests of our children.”

Details of the charges against Yee haven’t been revealed, but he’s scheduled to be arraigned at 1:30 pm PDT (4:30 pm EDT). We’ll update as more information becomes available.

8 Reasons Why Games Workshop Loves You

Bitcoin is Property, Not Currency, So It’s Taxable, Says IRS