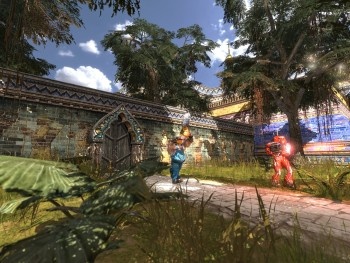 Serious Sam, the seriously awesome 2001 shooter from Croatian developer Croteam, will be blasting its way to the Xbox Live Arcade this summer. Seriously.

The game is being updated and retooled for the XBLA and will be released as Serious Sam: The First Encounter HD. It will feature 12 levels of ridiculously frenetic action set in a gorgeously-rendered hi-definition Egyptian desert, with support for four-player co-op action. “We are really excited to update our hero and recreate Sam in stunning high definition for Xbox Live Arcade players,” said Croatem CEO Roman Ribaric. “The fans have lobbied us hard to do this, so we are stoked about bringing Sam back as big, bold and bad as he ever was.”

Serious Sam: The First Encounter made a big splash when it was released for the PC in 2001, earning immediate acclaim among FPS fans for its massive, sprawling levels, endless hordes of enemies and some of the most over-the-top action ever seen in a videogame. It looked pretty fantastic in its day, too, but the visuals in the updated XBLA release far exceed that of the original.

Serious Sam: The First Encounter HD will be released in late summer for 1200 Microsoft points and if it’s anything like the original, will be well worth each and every one of them. Sam fans know what I’m talking about and if you don’t, this is a perfect opportunity to find out. Seriously.