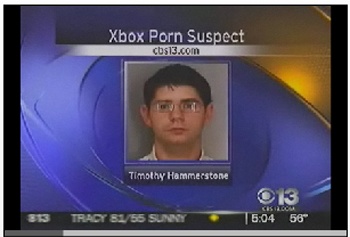 A grown man in Florida was recently caught exploiting a boy in California via Xbox Live, providing online credits in exchange for nude photos.

Stories about creeps exploiting kids online are, sadly, a regular part of the news these days. However, even playing videogames can prove to be risky if a child isn’t being supervised. Case in point: A 22-year-old man in Florida managed to sexually victimize a 10-year-old boy across the country via Xbox Live.

Timothy Hammerstone of Polk City, Florida, apparently was playing with the boy, who lives in Folsom (a city near Sacramento, California), via Live and turned their gaming sessions into something much more serious and scummy.

After Hammerstone and the victim met online, the man set up a separate Xbox Live account for the boy so his parents couldn’t monitor what he was doing. Exactly how Hammerstone was caught isn’t really clear. Presumably the boy’s parents found out about what was going on and contacted Microsoft and/or the proper authorities.

From the sound of things, it seems like the victim’s parents were aware of Xbox Live’s family settings and were using them to create a safe play experience for their son. Unfortunately, Hammerstone managed to find a way around these safeguards.

Personally, I hate hearing stories about adults preying on kids like this. I hope they throw the book at Hammerstone and he gets sent to prison for a long, long, time.