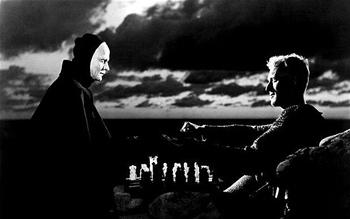 Because it’s not like computers are really good at chess or anything.

If you want to comment on this article – and you really do – chances are you’ll have to translate a jumbled combination of skewed letters into something resembling English to prove you’re not an unfeeling automaton posing as a human being. Captchas (Completely Automated Public Turing test to tell Computers and Humans Apart) are, of course, one of the most irritating things on the planet, but they are infinitely preferable to an army of remorseless spam bots filling every thread with offers of free iPads, prescription medicine and phallic enhancement.

The people behind chess forum, lichess.org, have found a less-irritating yet thematically-sound alternative; chess puzzles. To sign in to the forum, you need to enter your username and password, then cast your eye over a chess puzzle and make the correct move to put the white player in checkmate.

It’s a cute system, and far more entertaining than entering nonsense phrases, or worse, advertisement slogans, but how effective is it? Well, the first hurdle is that not every person trying to access a site is going to know the rules of chess. That’s fine on a site that is literally about chess. In fact, you could argue that the system keeps out undesirables, but I’m willing to bet a relatively small percentage of YouTube users know their rooks from their pawns. There’s also the rather huge caveat that computers are actually very good at chess, and it would be trivial to program a bot that can answer simple chess puzzles.

Still, it’s a fun little system. I’ve been refreshing the site’s login page every few minutes for the past hour, and I’m not even a member.

Source: lichess.org via The Register