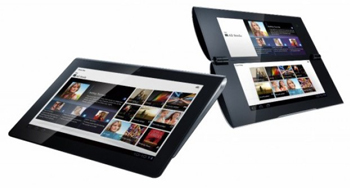 Sony gets touchy-feely with a new PlayStation tablet primed for gaming and media consumption.

In a market already saturated with competing tablet computers, Sony has decided to enter the fray with a new set of its own devices, previously announced only as the Sony S1 and S2 (presumably referring to the number of screens). We’ve known about these Android-based tablets since back in April when Sony first announced some early tech-specs, but now Engadget reports that the official title of at least one of them will have PlayStation wedged into its center.

The new Sony PlayStation Tablet S (yes, that mouthful is the official name) will sport a 9.4-inch display, a decent 1280×768 resolution, two cameras, and the ability to “provide seamless access and control of all devices in the home thanks to integrated WiFi, DLNA-compatibility, and an IR blaster.” Sony has also announced that the term “PlayStation” isn’t just a name; the new device will also be PlayStation Suite certified, meaning it will have full and official access to the PlayStation Store and Network services.

Sony is touting these new computers as media-centric, designed to allow “[smooth] access [to] digital content including videos, games and books through Sony’s premium network services and more, on-the-go at any time.” Between these, the Xperia Play (the PlayStation phone), PS Vita, PlayStation 3, and that Vaio collecting dust at your mom’s house, Sony has you pretty much covered for whatever virtual shenanigans you’re into.

As for price point, Engadget has to following say about it: “What we don’t know yet is [the Sony PlayStation Tablet S’s] final price — we’d heard $599 previously — but there should be more to say about that and the clamshell S2 tablet soon.” There’s still no word as to whether or not Sony’s fancy looking Nintendo DS clamshell-style “S2” will also join the ranks as an official recipient of the PlayStation brand, but I certainly hope so.