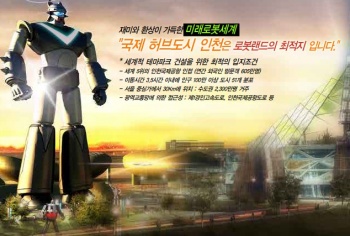 Things are getting a bit heated in the East Asian contest to see which country can build the giant-est giant robot in all the land, as South Korea has unveiled plans to build a 364 foot tall robot.

Building gigantic statues of fictional giant robot seems to be all the rage in East Asia these days. Japan has done it twice now in a single year, with its life-size Gundam in Odaiba and Tetsujin in Kobe, but South Korea is now trying to one-up Japan at its own giant robot building game with the announcement of plans to erect an absolutely colossal giant robot in the city of Incheon.

The statue will be of Taekwon V, known stateside as Voltar the Invincible, and will stand some 364 feet tall, making it not only much bigger than the 59 and 60 foot statues in Japan, but roughly three times as tall as the Statue of Liberty itself. Giant robots are more important than freedom and liberty. I think that’s the message that’s being sent here.

The robot will be erected in the middle of something called Robot Land, a theme park in Incheon that’s entirely devoted to everything and anything that has to do with robots. “Fun & Fantasy with Robot” is the English motto for the place, which should serve no doubt as the place where the robot uprising will begin when it opens to the public, along with its giant mascot, in 2013.

I for one am glad to see countries competing to build the biggest robot statues. Better that than a nuclear arms race, I say. “Build giant robot statues, not bombs,” a new rallying cry for peace in the 21st century.