Spinwhiz, known here at The Escapist as the creator of March Mayhem, is launching his own comic series. 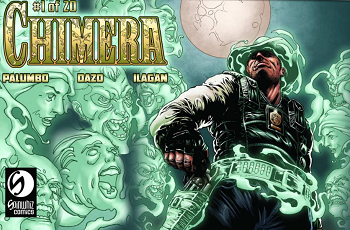 If you’ve been a regular forum goer at The Escapist for a while, you probably remember Spinwhiz as the creator and moderator of March Mayhem, and bane of trolls everywhere. In addition to his community-based talents, he’s also something of a comic connoisseur. Like-minded comic book readers will have a new series to watch starting today, courtesy of Spinwhiz himself. Spinwhiz Comics, a publisher of digital graphic novels, has announced that the first issue of its digital series Chimera, a twenty-part book packed with action and suspense, will now be available for readers to enjoy free of charge. Centered on Hudson Arliss, a police officer pursuing a serial killer, the story will follow him as he contends with his own terrifying dreams and the Chimera, a mysterious presence that threatens to take him over.

The first issue of Chimera will serve as a prelude to a Kickstarter which will presumably predicate the continuation of the series. Chimera will boast the talents of comic industry veterans including writer/publisher Jeff Palumbo, illustrator Bong Dazo (Deadpool, Knights of the Old Republic) and colorist Marlon Ilagen (Witchblade/Red Sonja crossover, Star Wars: The Clone Wars-The Enemy Within).

“We are very excited to offer this first issue free online in order to gear up for our Kickstarter campaign,” said Palumbo. commenting on the comic’s launch. “This series is a dream come true and we hope to be able to continue publishing such a thrilling and thought-provoking comic.” Readers interested in taking a peek at Chimera can head over to the Spinwhiz website where the first issue can be read in-browser.