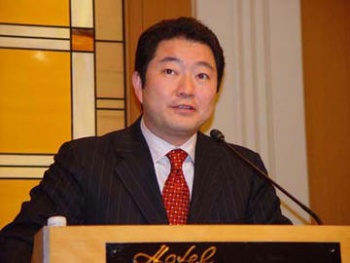 The Tokyo Game Show is the big gaming show over in the Land of the Rising Sun, and as such the big players in the Japanese industry pull out all the stops. One of the major panels at this year’s TGS featured the heads of the largest Japanese gaming companies – Capcom’s Haruhiro Tsujimoto, Konami’s Kazumi Kitaue, Square’s Yoichi Wada, Sony’s Shuhei Yoshida, and Namco’s Shin Unozawa – discussing “Strategies and Visions of Top Makers in the Global Era,” reports Joystiq.

Last year, Square-Enix’s Wada said in his keynote that he felt the Japanese gaming industry had “lost its position”, but it seems that a healthy dose of marathoning Dragon Quest IX may have changed his outlook – somewhat. Wada pointed to the four million copies sold of DQ9 as an example of how things were getting better, but felt that there was still an underlying problem: Japanese developers weren’t making many games oriented at adults.

“There are not many publishers that create games for adults,” said Wada. “In the West, they tend to believe it’s cool to play games, even adults.” Not so in Japan, he lamented, where there is still a heavy perception that games are for youth, and an outdated ratings system results in games like Fallout 3 being censored for violence. Though Wada does acknowledge that “game ratings [are] to protect children,” he thinks that they do need to be revised in the country in order to bring about the change necessary for Japan to reposition itself as a leader in the global market.

So to be clear, Wada isn’t saying that he thinks companies like Squeenix should make more “Platinum” games, but rather more games like Fallout. I can get behind that.