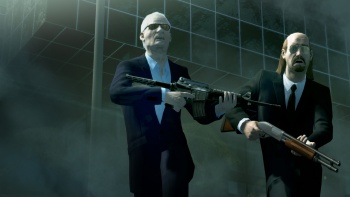 Square-Enix has founded an extremely edgy new label to handle the publishing of games otherwise too violent for its native Japan.

There’s been a concerted effort over at Japanese games giant Square-Enix to broaden its horizons to the West lately: Not only has head honcho Yoichi Wada publicly called his countrymen out regarding their anti-Western game bias, the company acquired embattled Tomb Raider publisher Eidos last year. Square-Enix has also teamed up with Activision to publish its titles over in Japan, most notably Modern Warfare 2.

The problem, though, is that many of its new Western titles are a bit much for Japan as far as violence is concerned. Gears of War (a title not published by Square-Enix) may have only earned itself an “M” rating over here in the States, but in Japan it was slapped with CERO Z – the equivalent to the ESRB’s dreaded “Adults Only” rating.

This week in Famitsu, big boss Wada announced the formation of the Square-Enix Extreme Edges brand, a label whose sole jobs will be to publish blood-soaked Western titles in Japan, and to have a name that journalists can make fun of. Extreme Edges will be in charge of putting out all of Square-Enix’s CERO D (17+) and CERO Z games from here on out, like Activision’s upcoming Blur and Singularity.

It seems that this change is made with the intent of letting parents know at a glance whether a game is suitable for their children or not – if you see the “Extreme Edges” logo on the box, best not buy it for little Takeshi. Nintendo recently did something similar in changing the color of boxes for Wii games aimed at teens and up to black.

Thus far, Square-Enix has never published a CERO Z game. Thanks to Eidos and the Extreme Edges brand, that might soon change.