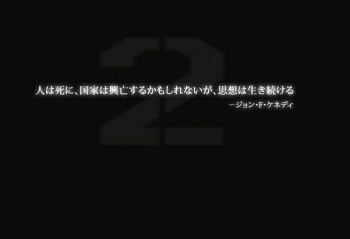 Big-name JRPG studio Square-Enix has put up a teaser site that teases its next game: Activision’s Call of Duty 4: Modern Warfare 2…?

There’s really no question about what this new teaser site is for. Even if it weren’t for the gigantic “2” in the style of the Modern Warfare 2 logo, or the rotating quotations about warfare from Ronald Reagan and John F. Kennedy to Bertrand Russel, the fact that the bottom of the screen discreetly contains legal information about Activision and the Call of Duty series seals the deal: This is a site advertising Modern Warfare 2.

It seems kind of odd, doesn’t it? After all, Activision is one of the biggest names in the industry, and given their assertions that MW2 could be the best-selling game of all time, why wouldn’t they want to capitalize on that by publishing it absolutely everywhere?

Well, that’s because Activision’s Japan branch no longer exists – it shut its doors at the end of last year. So I guess it falls to Japan’s native Square-Enix, here. While it’s tempting to imagine that Square-Enix’s involvement will alter the game by giving Soap McTavish an Eiffel-Tower hairstyle and adding two-minute summon sequences to the multiplayer … in actuality, they probably won’t be changing much of the game at all.

Which is a bit of a shame. Maybe those changes would help an FPS actually sell well in Japan for once.