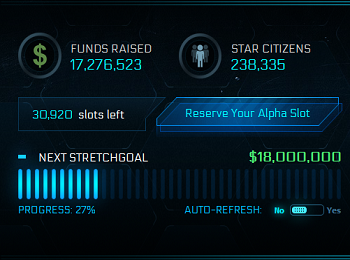 Back in June, Star Citizen became the most successful crowdfunding campaign ever, raising more than $10 million dollars, a number it would pretty quickly blow out of the water. By the beginning of August eager fans had bumped the project’s funds to $15 million. Now, a month later, that total has jumped even higher to a whopping total of $17 million dollars.

The game’s creator, Chris Roberts, was quick to thank the game’s backers. “The power of this community is simply amazing,” he said. That being the case, he also affirmed that Star Citizen “still [has] a ways to go before we have achieved the goal of being completely community funded.” In the past, Roberts has said that it will take anywhere from $20-22 million to fund Star Citizen in its entirety. “Based on our current trajectory we’re going to make it,” he said. “Maybe even by the end of this year!”

In the mean time, Roberts and Cloud Imperium Games have revealed the stretch rewards for a slightly lower milestone: $19 million. If Star Citizen can reach this goal, backers will be privy to new rewards, including a “Jane’s Fighting Ships style” PDF manual and the integration of finite space stations players can fight over and manage across the in-game galaxy. Roberts has also promised to continue airing monthly episodes of RSI Museum, a retrospective web series looking back on classic games that helped lead to Star Citizen. Obviously, the project will have to pass through the $18 million mark first, however, a goal that will net current backers the coordinates to an exclusive, hidden star system.