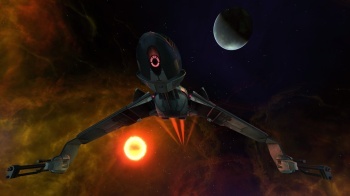 Star Trek Online Executive Producer Craig Zinkievich says he has “the coolest job ever,” so it’s a little baffling when he follows that up by announcing that he’s quitting.

I’ve always had trouble with letters of resignation that rant and rave about how awesome the soon-to-be-former job is. If you love what you do so much, why are you quitting? Take, for example, Craig Zinkievich, who’s been working on Star Trek Online for the past two and a half years. “Getting to work on Star Trek Online has truly been the highlight of my career,” he wrote in a message to players. “I still can’t believe how lucky I was when it became my responsibility to help make STO a reality. I’m often asked in interviews or online, ‘Isn’t your job the coolest job ever?’ Yes, yes it is.”

It sounds like a pretty sweet gig. But the point of Zinkievich’s message isn’t to let the world know how cool his job is, but to let the world know that he’s leaving it. “It’s time for me to move on,” he wrote. “I’ve decided to take a break from Cryptic Studios for a bit and focus on other things, like hanging out with my kids over the summer, walking my goat more and taking care of my bees.”

Taking over from Zinkievich will be Daniel Stahl, a producer on STO as well as Champions Online. “The Star Trek Online development team is the most amazing, passionate, dedicated and hardest working team that I’ve ever had the honor of working with,” he continued. “With Dan in the Captain’s chair, I’m confident that this team will be true to Star Trek’s vision and continue to expand STO to its fullest potential.”

Given the tepid response to Star Trek Online when it was released in February, I’d say Stahl has his work cut out for him.