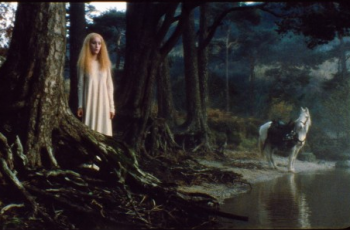 This 25 minute fantasy short turned up – after years of searching – in Universal Studios’ archive.

Roger Christian, who created the Alien set’s distinctive look and won an Academy Award for his set design work on Star Wars, once created a 25 minute fantasy short intended to air just before screenings of Empire Strikes Back. This film, Black Angel, ended up only showing in the UK, Australia and Scandinavia, before vanishing into the mists of time. Christian lost his copy, 20th Century Fox’s copies had long since vanished, and even George Lucas no longer had a print. For 33 years, Black Angel effectively ceased to exist, until finally the archivist at Universal discovered a tin with negatives and elements of Black Angel. “I’ve been tracking this down and it seems to point to you,” the archivist told Christian. “Do you think it’s yours?” It was, and it has been restored. Black Angel will get its first public showing in three decades at a California theatre in Marin County, early in October.

Christian made Black Angel for about £25,000, with just enough cast, crew and equipment to fit into two cars and a camper wagon. The film tells the story of a knight, drawn into a strange, parallel world, in which his maiden is held captive by an evil knight, the Black Angel of the title. It first got a showing at Pinewood Studios, for Lucas and a number of other film luminaries. “I was under the desk in fright at the back of the theatre,” Christian recalls. But after its limited theatrical release, Black Angel didn’t show up again on VHS or DVD, and when Christian lost his copy 20 years ago, he thought it might have gone for good. Then he got the call from Universal, and the restoration process started.

When Christian first got hold of Black Angel, his first thought was to release it again in downloadable form, or perhaps even in a cinematic release. Then his inner doubts took over. “I was just debating, ‘Should I ever release this or not?'” Christian remembers. “Maybe it doesn’t stand up to the mythology.” But in the end he couldn’t live with himself if he didn’t do something with it, hence the (very) limited theatrical release at the Mill Valley Film Festival. After that, Christian isn’t sure what to do with it, but says he still wants to distribute it somehow. How, is the question. If you’ve a yen to see Black Angel, California in October is the place you want to be.