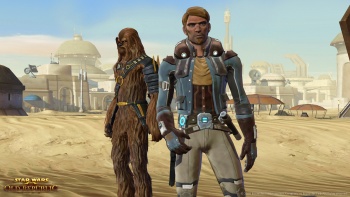 Becoming a smuggler in The Old Republic will reflect the life of Han Solo in every way possible.

Separate famous Star Wars smuggler Han Solo from his Wookiee companion Chewbacca, and you’ve got a smuggler that isn’t nearly as cool. So where would the smugglers in BioWare’s upcoming MMO Star Wars: The Old Republic be without Chewbaccas of their own? Somewhere, but thankfully they’ll have a Wookiee friend named Bowdaar that tags along to make them cooler too.

BioWare has revealed that the Wookiee warrior will be a companion for the smuggler class in the game. Bowdaar is impressively said to fight “without the benefit of armor or weapons,” and is so good that some call him an “immortal creature who can’t be killed.” He was enslaved as a child and forced into arena fighting, where he’s won 10,000 matches in 108 years, including the besting of a Jedi.

The Old Republic‘s companion characters sound like a step up from pets in other MMOs. They have their own motives and opinions and can even introduce new quests, but players also have the ability to equip them with gear and activate special abilities. They’ll tank, provide extra DPS, heal, and control crowds of enemies.

Bowdaar joins previously revealed companions that include a Twi’lek pirate and stubborn droid, but I don’t see either of them wearing a sweet pair of goggles, so Bowdaar is definitely the coolest I’ve seen so far. BioWare also revealed the smuggler’s advanced classes – Gunslinger and Scoundrel – and his/her personal starship, with a gameplay video that explains the class here. I personally don’t need to see it and knew my class choice once I heard the word “Wookiee.”