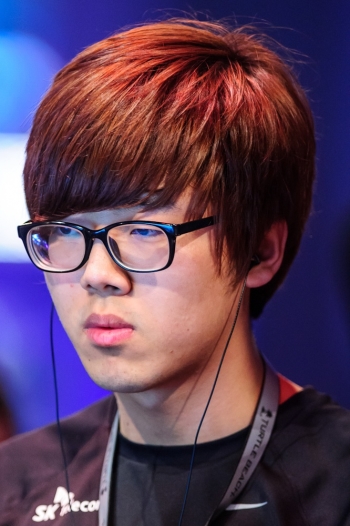 The heavily favored Kim “sOs” Yoo Jin lost 4-1 to Won “PartinG” Lee Sak, who takes home the $20,000 USD prize from Red Bull Battle Grounds New York. Last year, South Korean Protoss player Won “PartinG” Lee Sak won the 2012 Battle.net World Championship, earning himself a $100,000 USD prize and the title of world champion. Earlier this month, Kim “sOs” Yoo Jin took that title and $100,000 USD by winning the StarCraft II World Championship Series (WCS) Grand Finals hosted at BlizzCon. Lee Sak had been absent from the top level of international play, and did not qualify for the WCS Grand Finals. This weekend, the Red Bull Battle Grounds New York gave these two champions a chance to clash. The matches between them were peppered with trash talk, with Lee Sak telling Yoo Jin “I am your daddy” in game chat in the first match of the finals. Holding his trophy, Lee Sak said, “A lot of you guys didn’t see me this year and I feel so sorry for my fans. But as you fans believed in me, I felt like I was able to repay that with this win. I’m happy.”

One of the commentators for the tournament, Sean “Day[9]”, Plott told The Escapist before the tournament that Lee Sak would likely go out quickly in the tournament. “If he does get into the finals I will say that was a very low probability event,” said Plott on Thursday. Speaking to onGamers’ Rod Breslau after the tournament, Plott described Lee Sak’s play as “sheer precision across the board.”

Yoo Jin almost didn’t make it to the finals, coming close to defeat against Canadian player Sasha “Scarlett” Hostyn in the semifinals. Hostyn beat Choi “Bomber” Ji Sung, the only Terran player in the tournament, in an amazing comeback that ended 2-1 for the Canadian player. She won the first two games of the five-game semifinals series against Yoo Jin, and nearly defeated him with a huge push into his base 17 minutes into the third game. The crowd was chanting for Hostyn, but Yoo Jin survived and came back to win the series 3-2. Hostyn won the third place match against Jan “MC” Min Chul, earning herself $6,000 in prize money. “I’m really sorry for losing to sOs,” Hostyn told the crowd. “I’ve always wanted to make it to the finals of a big tournament. Hopefully I can next week.” Hostyn will be competing at ASUS’ NorthCon in Holstenhallen Neumünster, Germany on December 6-7.

The eight-player tournament ran November 23-24 in New York City. Replays and highlights of the tournament are available on the Red Bull Battle Grounds official site.

Quiz: SMITE Quiz of the Gods