Usually, when we play the latest installment of our favourite franchise and discover that it sucks, there’s not a lot we can do about it (besides complaining on the internet). Eric Barone, dismayed that his beloved Harvest Moon series had become progressively worse over the years, decided that complaining wasn’t good enough, and set out to make his own take on the franchise that didn’t suck. He spent four years developing Stardew Valley entirely solo, building everything from the art, to the programming, to the sound. Taking inspiration from games like Terraria and Minecraft, Barone has developed not just a good Harvest Moon game, but a unique blend of genres that is fantastic in its own right. 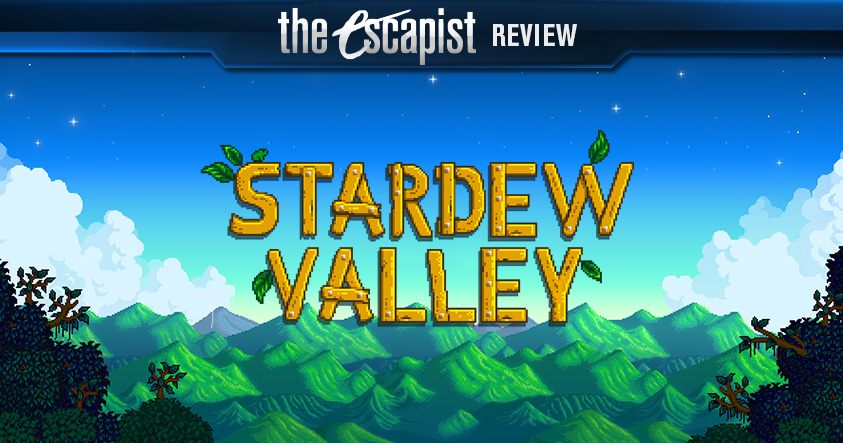 For those of you expecting the bare-bones story, open-world nature of Minecraft-esque games, Stardew Valley will surprise you. It actually opens with a proper backstory: your grandfather has left you a secret farmhouse in Pelican Town on his deathbed, and your player character is fed up enough with modern life to escape to it. Upon your arrival in the town, you are introduced to its residents, and I have to say, despite all being programmed by one dude, they all have their own unique characteristics. I was expecting a bog-standard assortment of JRPG stereotypes, but was pleasantly surprised to find that Pelican Town’s residents all felt like, well, real people.

The first “quest” of the game encourages you to go out and meet all of these people, which is a slow way of introducing you to the town, with its various crafting and shopping hubs. Pelican Town’s layout is absolutely beautiful – it’s big enough to feel like a real town without being too big as to be overwhelming.

Every townsperson has a kind of “relationship meter”, which you can fill up by giving them specific gifts, and there are a half-dozen or so bachelors from each sex that you can eventually romance if you keep at it. In fact, there are so many people in the town that it was actually a little overwhelming at first – particularly when you start getting quests from the notice board to deliver certain items to specific people! 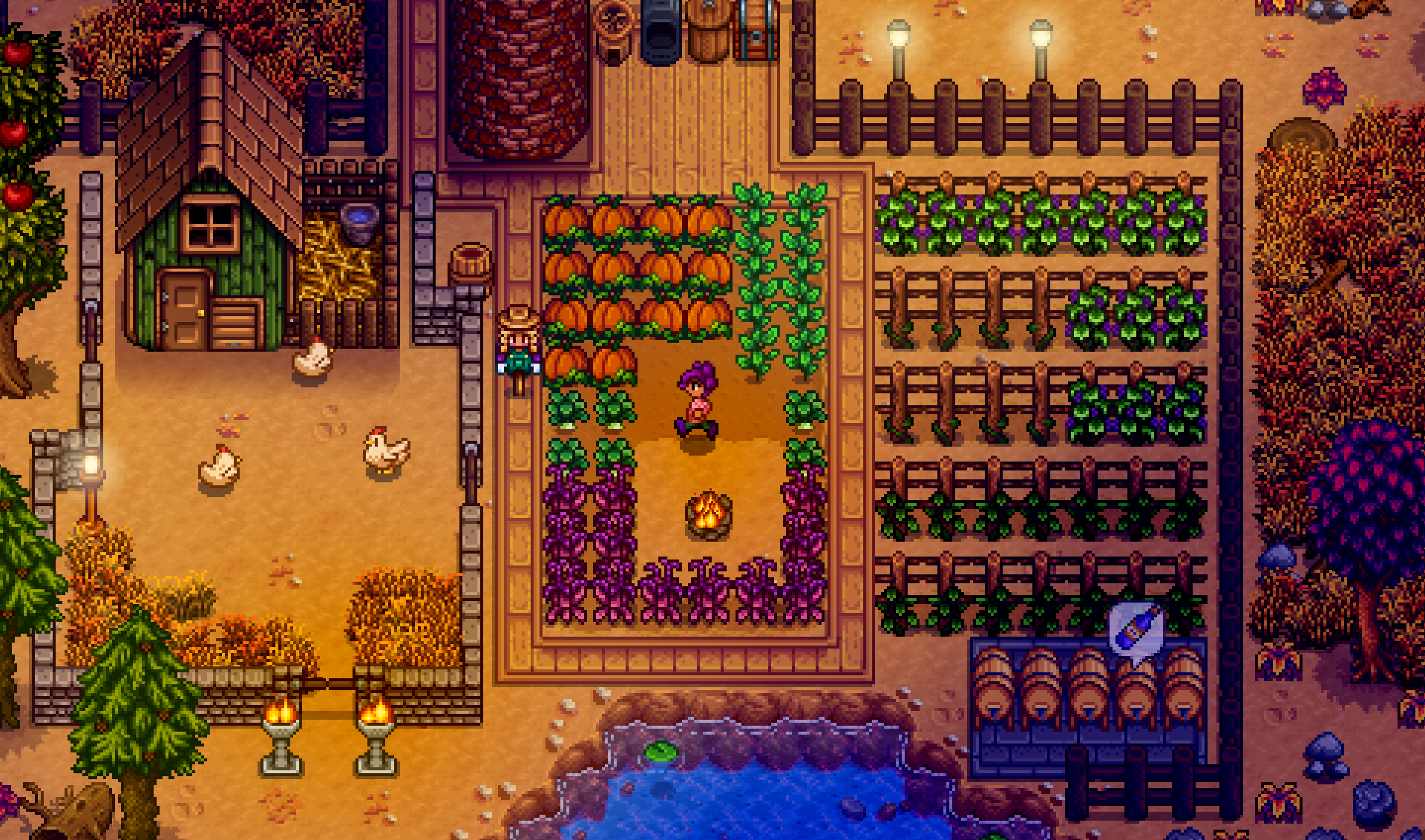 After your first jaunt through town, you’ll end up back at your farm, where the game will teach you how to grow produce. It’s a painfully slow form of progression for those of you who are itching to just go out, kill monsters, and collect stuff, and is worsened by the fact that performing actions physically exhausts your character, and you have to go to sleep every night to replenish that exhaustion. Game saves are also tied to sleep which I found a bit frustrating. Lack of manual saves in a PC game is a big no-no for me these days.

While initially frustrating, the slow progression does do a fantastic job of gradually introducing you to each new system in the game. You’ll learn how to fish, how to farm, and how to craft, before the game eventually brings you to its dungeon: the mines. Once there, the combat will feel pretty familiar to RPG fans. You will mine and fight your way down an endless array of “levels”, finding loot and other goodies along the way. Your character’s inventory space is severely limited (at least before you get the backpack upgrade) compared to other games, so it’s a good idea to take only what is absolutely necessary with you on adventuring runs, and leave all of your other tools and such back home.

It’s worth noting at this point that although the dungeon does have randomly generated enemies and loot, you can’t actually dig away at the walls. Similarly, you can craft objects to place around your home and its surrounding lands, but you can’t really alter the land itself, and apart from a few special events, can’t change anything at all within the rest of the town. It’s not really a negative, as we couldn’t have such a beautifully designed world otherwise, but you should know that this aspect of the game is much more Harvest Moon than Minecraft. 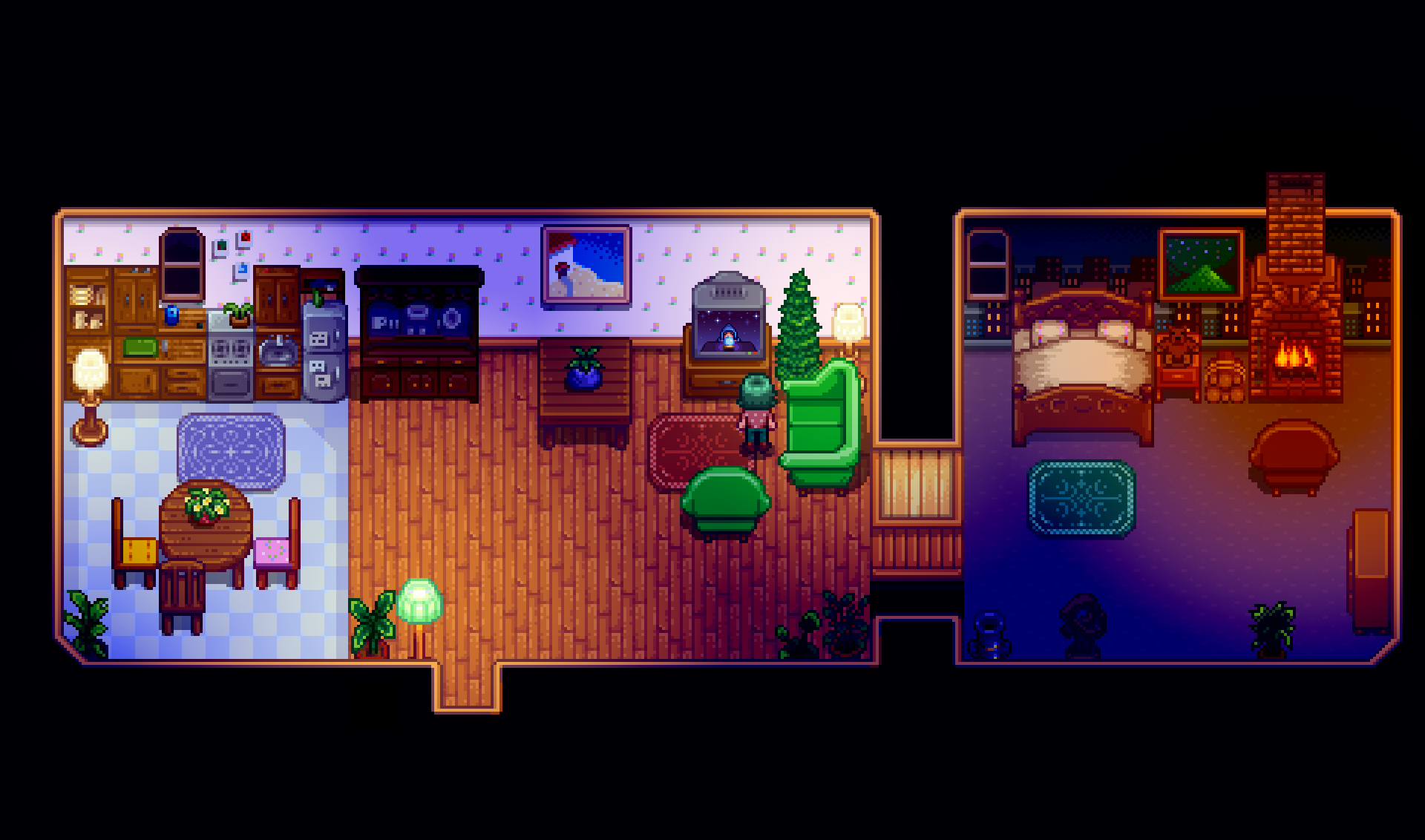 As well as being a beautifully designed, Stardew Valley is also just plain beautiful. The pixel art style is simple, but charming, and really does a great job of drawing you back to those old school Super Nintendo days. I particularly loved how the interior of houses are designed, with a healthy dose of attention-to-detail making them, just like the people themselves, feel real. The music and sounds are calming and relaxing, and contribute to the game’s super laid-back feel. You can seriously spend hours in this game just kind of drifting by and enjoying its simple tasks: there is never a real rush to do anything, and the game doesn’t punish you by not moving at a certain pace.

So far, I have covered a lot of things players will do in their first few hours with the game, but to tell you the truth, I have barely scratched the surface. I’ve sunk hours and hours into this game, and I am still being introduced to new features and systems. It is absolutely massive, and despite retailing for a mere $14, will keep you entertained long after Generic Triple A $60 Shooter’s 4-hour campaign is over. It’s almost impossible to believe it was all made by one man.

One of the only major negatives I have with the game is that it sort of sold itself on co-op multiplayer early in development – a feature that is absent in its initial release. Rather than go for the usual “Early Access” nonsense, Barone decided to simply release the game as a “complete” singleplayer experience, and add multiplayer as a free update later on down the line. I’m curious as to how multiplayer will work, considering that the game’s world is fixed, and it is tied into these static day-and-night cycles.

Additionally, for those of you worried about a “fire-and-forget”-type situation, Barone has already released quite a few bugfixes for the game since its launch, and is hard at work on additional downloadable content that will all come absolutely free of charge.

Bottom Line: Stardew Valley is an absolutely charming little gem about forgetting all your worries and relaxing on a farm.

Recommendation: If you wished that Terraria had a proper story holding it up, or like Barone are dismayed that there hasn’t been a good Harvest Moon game in forever, then Stardew Valley is for you.